The All Year Figure Skating Club was formed in 1939 at what was then the Tropical Ice Gardens in Westwood Village by a small group of skaters under the leadership of Ann Rork Getty. As the popularity of skating grew, so did the club; it became big enough to hold separate junior and senior sessions, and among the club’s professionals were Eugene Mikeler, Hubert Sprott and Helen Gage Moore.

The club would soon grow even bigger: When the Mercury FSC lost its ice, it was invited to share the Westwood rink, and the two clubs merged to become the All Year-Mercury FSC. But Mercury would soon disband, and the club reverted to its All Year FSC name.

The club suffered a severe setback in 1949, when the Westwood rink — by this time known as the Sonja Henie Ice Palace — was torn down to accommodate expansion of UCLA. Arrangements were made to conduct sessions at what was then the Pan Pacific Arena, but a year later that rink discontinued its ice, and All Year was again without a home. Through the courtesy of the Los Angeles FSC, one session a week was acquired at what was then Hollywood’s Polar Palace.

But because it was nearly impossible to hold together a large junior and senior membership on one session a week, the club decided to devote that ice time to a senior dance and figure session. That way, a nucleus of loyal members could be retained to help All Year again pursue the objectives stated in its bylaws: to promote and improve figure skating in all its branches.

In 1962, All Year’s Board of Directors learned that a new rink would be built in Culver City. The Board negotiated with the rink’s owners to obtain two sessions a week, while still retaining the dance session at Polar Palace. When sessions began in October 1962, Culver City Ice Arena became All Year’s principal skating headquarters. Six months later, Polar Palace was destroyed by fire, prompting All Year to add a Sunday session at the Culver rink.

In 1968, the Golden West Open Freeskating Championships were created. Up until that time, all skating competitions allowed only those who placed among the top eight in figures to compete in freeskating. Many skaters never had the opportunity to perform their programs, so the competition, which was open to all levels, proved to be extremely popular. Figures were added during the 1980s but were later removed, continuing the freeskating-only format used today.

But the highlight of the club’s history was hosting the 2002 State Farm U.S. Figure Skating Championships at Staples Center. The 2002 Nationals Committee — Doug Williams, Valerie Lundy, Carol Hunt, Larry Kriwanek and David Simon — organized what at the time were the most successful championships to date, and All Year’s 21 competitors that year came away with eight medals.

All Year has been represented at the World Championships by Scott Williams, Sharon Carz, Doug Williams, Scott Wendland, Trifun Zivanovic, Angela Nikodinov, Beatrisa Liang, Rena Inoue and John Baldwin Jr., Richard Dornbush, Madison Chock and Rockne Brubaker, and at the Olympics by Scott Wendland, Beata Handra, Rena Inoue and John Baldwin Jr. In fact, when Rena and John competed in pairs at the 2006 Winter Olympic Games, they entered the figure-skating history books by landing the first-ever throw triple axel at the Olympics.

As of June 1, 2012, the All Year FSC has moved its principal rink location to Center Ice in Ontario, CA. A celebration was held in 2014 for the 75th Diamond Jubilee of the All Year FSC. 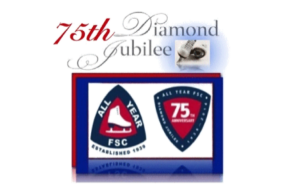 All Year is proud of the accomplishments of all its members and looks forward to their continued success and history-making performances.